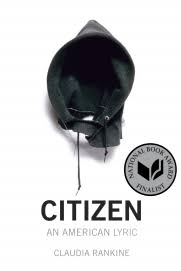 Citizen is a beautiful and heartbreaking and angry book on being black today in America.  I taught a portion of this poem to my Introduction to Literature students in the fall and the spring as a way to talk about Ferguson, about Eric Garner, about Treyvon Martin, and about discrimination and privilege and the violence of discord.  The students liked this poem (this is the excerpt that I used: http://www.poetryfoundation.org/poetrymagazine/poem/247344, but many students, specifically my students of color (not just black, but Iranian, Latinos, Native American, and others), related to Citizen, but didn’t count it as their favorite poem of the week.  They said that it rang true, that it was right, that they each had a story like that, but more most of them, it seemed what they were looking for wasn’t rage articulated.  Many of them loved the interview with Rankine in The New Yorker even more: http://www.newyorker.com/books/page-turner/seen-interview-claudia-rankine-ferguson   I also taught Shyla Hardwick’s powerful poem, “Worms,” https://www.youtube.com/watch?v=SPTmaCpXV9Y which many students loved, not just because it was spoken word, a form that is most popular amongst my students, but because in it, she is visibly scared, upset, intelligent, and asking questions to which she doesn’t know the answer.  She is at least twenty years the junior to Rankine, and while she expresses anger, she mostly expresses sorrow.  But the favorite poem was the poem “Let America Be America Again.”  http://www.poets.org/poetsorg/poem/let-america-be-america-again  This was loved both by my students of color and my white students, and when we discussed why, it came down to unity of the poem, that there are many ways of being oppressed and held down, but also the hope of the poem as well, that we could be better.  The poem doesn’t diminish or dismiss the racism of America, but it also unites it with the way we treat our workers, our immigrants, our homeless.  It was apparently viewed tens of thousands of times over the few days immediately following the death of Michael Brown, and my classes agreed that is why – that while the violence and anger seemed threatening to tear us apart, for the majority of us, their is a longing to be together, to be better than we are.

This is supposed to be a review of Citizen, and so I’ll get back to that.  Ultimately it is a powerful and beautiful book.  It reads, to me, more like a long form lyric essay than a poem, but those are blurry lines.  And there is glimpses of hope in the rage, but mostly it is a book of pain.  It is an intelligent deconstruction of the racism facing Serena Williams on the tennis court, and facing black men and women every time they walk out their doors.  And that rage is needed too.  While we need poems of unity and hope, we also need poems and books that rip back the veneer and show us the truth.  Only then can we hope to be better than we are.

This morning I read a blog post by Brother James, of the Order of the Holy Cross, from their Grahamstown, …

The Great Silence – Contemplative Days: During my last week at Holy Cross monastery (click here to see my blog …

I’ve spent the last month at Holy Cross Monastery, an Episcopalian monastery on the Hudson River, a few miles north …

Every once in a while I read a book and think: “How have I never read this author?!” Laurie Colwin …

I’ve been working my way through these Notebooks for the last few months.  I love reading writer’s journals and …

About a year ago, several months before Alice Munro so deservedly won the Nobel Prize for Literature, I set out …

I have so much to say about A Tale For the Time Being, and yet nothing I can say.  This …

With full disclosure before I continue forward with this review, Christian Anton Gerard is a friend of mine. We went …